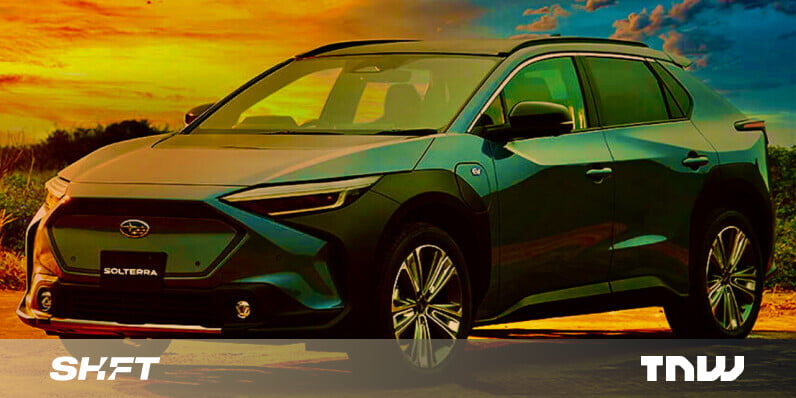 Timing is everything when it comes to product launches. Look at Subaru. For months, it’s been counting down the debut of the company’s first all-electric SUV, the Solterra, at next week’s LA Auto show.

Then suddenly, overnight, the company unveiled its battery electric vehicle online in Japan. Highly strategic, if you ask me, with the timing of COP26.

But before we dig into the bigger issues this suggests, let’s take a quick look at what’s on offer.

Innovation born out of friend rivalry

The Solterra is the result of a two-year project: the development of the e-Subaru Global Platform together with Toyota Motor Corporation. Let me remind you here, Toyota owns 20% of Subaru.

Not surprisingly, the electric SUV shares the platform d technology with Toyota’s first BEVmodel, the bZ4.

Two versions of the Solterra are available: ​​the front-wheel-drive has a cruising range of 530km, and the 4WD version can drive 460km on a single charge.

The cars both come with a 71.4kWh battery under the floor with a capability to DC fast-charging up to 150kW — although the company has not shared how long a full charge will take.

A solar-paneled roof — I want to know more

The presentation alluded to a solar-paneled roof, but details have been scant. Of course, this is no real surprise as its name combines the Latin words for sun and earth. I’m interested to know what increased capabilities the solar roof will add to the battery range.

Why launch the Solterra a week ahead of its scheduled release?

What’s interesting is why now? It’s not like the LA Autoshow is small fry.

Further, it’s no coincidence that the Japanese launch coincides with OEMs such as Ford, Mercedes-Benz, General Motors, and Volvo committing to a declaration of sustainability at COP26:

We will work towards all sales of new cars and vans being zero-emission globally by 2040, and by no later than 2035 in the leading market.

Compare this to Japan, a country that has traditionally been recalcitrant in committing to renewable energy. Their local auto industry is now struggling to save face.

Toyota — the world’s top-selling carmaker — only released their first all-electric vehicle in 2020. While they’re invested in hydrogen, they have really lagged in keeping pace with renewable innovation. Is the partnership with Suburu as much about redeeming their image as a friendly rivalry?

But to make matters worse, they have not signed the COP26 pledge, nor has Suburu or Hyundai-Kia. The Renault-Nissan alliance is also absent from the list. It’s not a good look for Japan.

Indeed, for an industry that relies heavily on exports to Europe, Australasia, and the US, it’s odd behavior. Especially, as countries button down on subsidies and incentives for electric vehicle manufacturing and ownership.

But its not all bad in Japan

Fortunately, it’s not all bad news for Japan. Hyundai’s heavily invested in hydrogen, and the Nissan Leaf remains one of the world’s top-selling electric cars.

But while the Nissan Leaf focuses on the city driving market, the Solterra is designed to be off-road and all-weather capable.

Solterra has adopted a new system that drives the front and rear wheels with separate motors.

Like the other Suburu SUV models, Solterra features the X-MODE AWD control system that enhances the sense of security on rough roads.

Additionally, they’ve adopted a new Grip Control function, which enables the vehicle to run at a constant speed, stabilizing it even on rough roads. This is an all-terrain vehicle for off-road driving. So who’s their competition? The Rivian R1S SUV?

The Solterra is scheduled for market launch in Japan, the USA, Canada, Europe, and China from mid-2022.