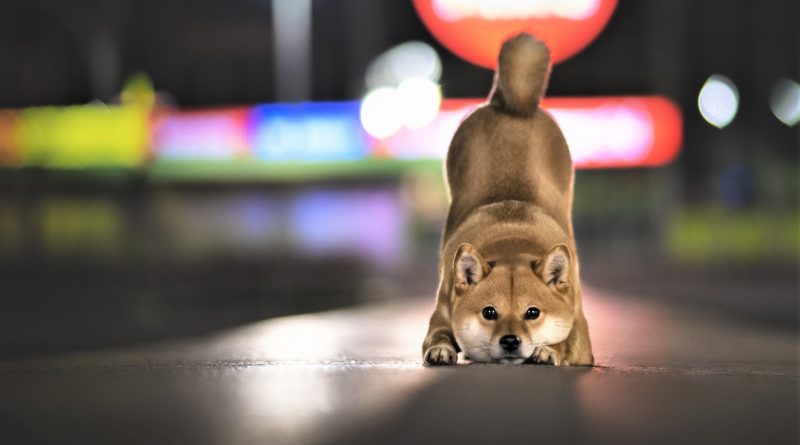 The popular meme coin shiba inu (SHIB) once again saw a massive pump over the weekend, rising by more than 50% on Saturday and Sunday before a correction reduced the gains as the new week started. And based on experience from other meme coins, even deeper corrections could arrive when the hype dies down.

Judging from data from some exchanges, including FTX and Poloniex, the weekend pump marked a new all-time high for the self-proclaimed dogecoin (DOGE) killer. However, on some other exchanges, including Binance, a higher peak was seen on the token’s listing day on May 10 this year, although this may have been the result of thin order books on the first day of trading.

Today’s correction for SHIB came just as Tesla chief Elon Musk replied to a tweet from a Shiba Inu community member asking how many SHIB he holds. “None,” Musk answered, without elaborating, to which the community member replied “U should consider buying some.”

Further, while responding to another user in the same thread, Musk also warned “don’t bet the farm on crypto,” before adding:

“True value is building products & providing services to your fellow human beings, not money in any form,” the Tesla founder and dogecoin proponent said.

The advice and blunt answer from Musk that he does not hold SHIB, which came just as the coin was correcting from its highs, begs the question of whether SHIB holders are simply betting that social buzz, and particularly mentions from well-known investors like Musk, will be what is needed to propel the price higher.

And while history has shown that amazing price pumps can occur from time to time for meme coins like DOGE and SHIBA, lessons from the DOGE mania in May this year remind that the subsequent corrections can be deep when rallies are purely driven by hype.

From its all-time high on May 8 of USD 0.74, DOGE corrected by as much as 78% within less than two months, to a low of USD 0.16 on June 22. (However, at the same time, the whole market was dropping.) In either case, the original dog-themed meme coin has since recouped some of its losses, but still remains down by around 65% from its peak, even as bitcoin (BTC) has reached new all-time highs.

The fall in prices for dogecoin can also be seen in Google search data, which is often used as a proxy to determine general interest in a subject.

Judging from Google Trends, worldwide Google searches for the term “dogecoin” peaked in mid-May, just as the coin reached its all-time high in the market. Since then, search interest has fallen significantly and is still nowhere near its highs.

The picture perhaps becomes even clearer when we add the term “shiba inu.” The data then shows how interest in DOGE has recently been overtaken by a surge in search interest for shiba inu.

Despite the significant fall in both price and search interest, however, the dogecoin community is still alive and responding to tweets from the self-proclaimed “dogefather” Elon Musk. This was again illustrated just before the weekend, when the Twitter account UberFacts tweeted “Elon Musk is predicted to become the world’s first trillionaire, thanks to SpaceX.”

About two hours later, Musk replied “*In Dogecoin,” which immediately led to a spike in the price of DOGE visible on the hourly chart.

Meanwhile, SHIB has recently gotten some attention from a petition on Change.org that is asking the popular US-based stock and crypto broker Robinhood to list SHIB for trading on its platform. As of Monday, the petition had already received well over 300,000 signatures from users.

“Dogecoin has been a huge success for Robinhood, and its investors. We have all enjoyed the ride. Shiba Inu is a similar meme coin with genuine potential, up 2000% in the last weeks,” the petition said.

So far, and despite some unverified rumors circulating online, no word has been heard from Robinhood that the trading app is even considering adding SHIB to its platform.

The SHIB token is now ranked 11th in terms of market capitalization, two spots below its fellow dog-themed meme coin DOGE. The ranking today means that the valuation difference between SHIB and the original DOGE has remained roughly similar since the two coins earlier this month stood head to head for meme coin dominance.

And although the “dogecoin killer” is still valued lower than the original dog-themed meme coin, both meme coins, which are generally seen as having little to no real utility, have already surpassed major DeFi-related tokens such as the Avalanche blockchain’s AVAX token and Uniswap’s governance token UNI.

Commenting on the recent rally for SHIB over the weekend, Ben Caselin, Head of Research and Strategy at trading platform AAX, said “speculation is the primary driver” behind meme coin prices.

“During a bull market, when sentiment runs high, it doesn’t take much for a memecoin to see a significant boost,” Caselin said in an emailed comment, before warning that “there is no specific reason” for the huge inflow of capital into SHIB.

“Considering the history of crypto and how market dynamics have generally played out over the past decade, SHIB is likely to be challenged by other viral projects and is likely to shed much of its value when the top assets such as bitcoin and ethereum enter into the final stages of this cycle’s bull run and the usual correction that follows as the assets secure their newly raised price floor,” Caselin concluded.
____
Learn more:
– Dogecoin Wannabes Flood The Market With Pumps & Dumps
– ‘DOGE Killer’ Shiba Inu Clogs Ethereum While Musk Lifts Dogecoin Again

– DOGE’s Rally Has Revived Dogecoin Development, But For How Long?
– Are GameStop-Style Surges In Crypto Any Different From Old Pumps & Dumps?