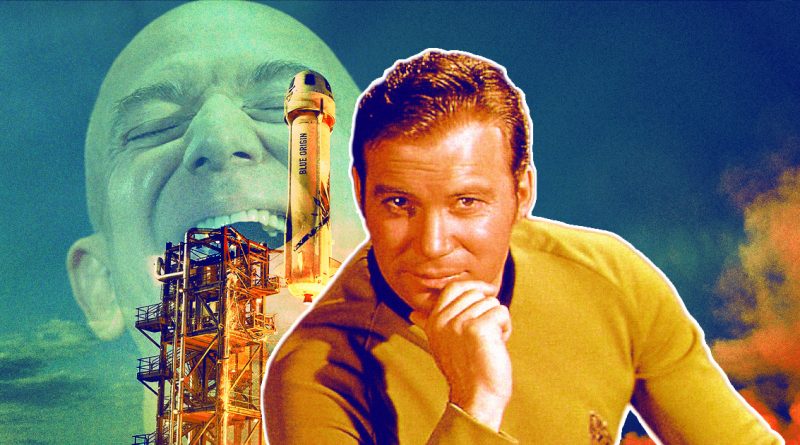 It was an awkward moment.

As soon as famed “Star Trek” actor William Shatner clambered out of Blue Origin’s New Shepard capsule, as seen on Blue Origin’s live stream today, he was clearly overcome, visibly shaken by the experience of seeing the Earth whip by.

Shatner, alongside three other passengers, reached an apogee of over 66 miles during today’s launch, narrowly crossing the boundary of space, at least depending on who you ask.

But when he tried to tell the company’s co-founder, Jeff Bezos, about the profound experience, things got weird.

As Shatner tried to wax poetic about the experience, Bezos listened for a few moments, but then turned away from a displeased-looking Shatner to focus on something more pressing: champagne.

“Give me a champagne bottle,” Bezos said, gesturing to nearby staff and interrupting Shatner. “I want one.”

“Here,” the billionaire continued, popping the bottle and spraying Blue Origin employees with it as Shatner looked on, appearing nonplussed. “You want a little of this?”

You can see the moment right here:

Shatner, in contrast, seemed profoundly affected by the once-in-a-lifetime experience, and refused a swig from Bezos’ bottle.

It was a brief and bizarre clash of wavelengths and priorities that encapsulated what Bezos seems to be after: building a profitable space empire, with more emphasis on glitz and glamor than the philosophical implications of space travel.

To Bezos’ credit, he did take a couple of minutes to listen to Shatner wax poetic about life and death after hosing down his lackeys with bubbly.

“It was so moving,” a shaken Shatner told Bezos. “This experience is something unbelievable,” adding that every human on Earth should be able to have the same.

“To see the blue color go whip by,” he added. “This comforter of blue we have around us… Then you’re looking into black ugliness. There’s mother of Earth and comfort, and then there is death. Is that what death is?”

Bezos stared at him almost incredulously. At one point, he muttered: “It’s so beautiful.”

“No, I mean your words,” he clarified.

Shatner seemed genuinely moved by the experience, even if Bezos was in party mode.

“I hope I never recover from this,” he told Bezos. “I don’t want to lose it. It’s so much larger than me and life.”