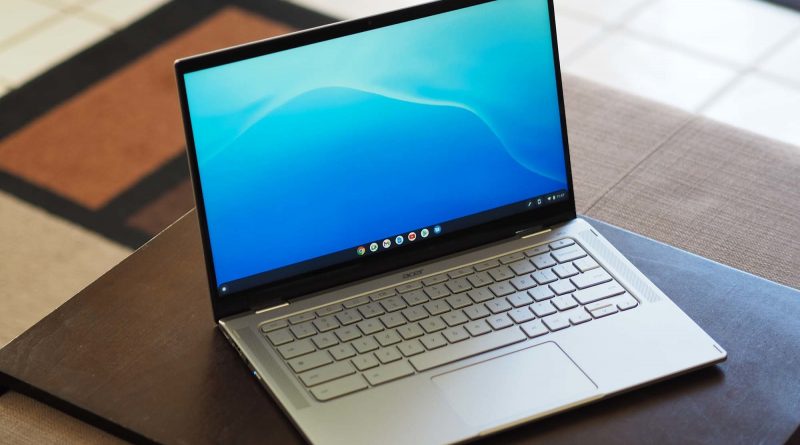 There was a time when a 14-inch Chromebook convertible 2-in-1 with an Intel Core processor would turn some heads. Chrome OS doesn’t need a superfast CPU to be a screaming machine, and tossing in an 11th-gen Core i7 with 8GB of RAM or more (a lot for Chrome OS) creates a laptop that won’t ever make you wait.

Even though it’s becoming more common to see such powerful Chromebooks hit the market, it’s still worth noting when one does. The Acer Chromebook Spin 514 is one such machine, and it fits the bill with not only fast CPUs, but also up to 16GB of RAM and the option for a 512GB PCIe solid-state drive (SSD) — a massive amount of high-performance storage for Chrome OS compared to the requirements of Windows and MacOS.

I couldn’t run the machine through our full suite of benchmarks, but I came away from my time with the Acer Chromebook Spin 514 quite impressed.

The Chromebook Spin 514 is constructed entirely of metal yet weighs just 3.02 pounds. It’s 0.68 inches thick, and its chassis is moderately sized thanks to display bezels that are thin along the sides and reasonably thin on top and bottom. It’s not a tiny-bezel laptop, but it has smaller bezels than you’ll find on some other budget laptops, including a smaller bottom chin than many convertible 2-in-1s possess. The build quality even on this early preproduction model was solid, with no bending or flexing in the lid, keyboard deck, or chassis bottom.

Acer created a conservative design, with an all-silver chassis that has simple lines and angles. The hinges are chrome, which adds some flair, and there are enough chamfered edges to avoid it being a completely minimalistic design. The Chromebook Spin 514 is a laptop that fits in the boardroom as well as it does in the coffeehouse.

There’s also plenty of connectivity, with a full-size HDMI port (unusual for Chromebooks), a USB-A port for legacy support, and two USB-C ports with Thunderbolt 4. The latter is particularly unusual on Chrome OS devices and promises higher performance than the usual USB-C 3.2. Wi-Fi 6 and Bluetooth 5.0 provide wireless duties.

With a Core i5-1140G7 and 8GB of RAM inside, the Chromebook Spin 514 promises to be very fast. Again, I couldn’t test it given its prerelease nature, but I ran it with tons of open Chrome tabs and numerous Android apps in the background and I couldn’t slow it down. This has been my experience with every high-end Chromebook I’ve tested. And while I’m not the biggest fan of Chrome OS because of its lack of support for the legacy Windows apps that I rely on, I recognize the value of its lightweight nature and how fast and seamless it can run with less hardware. And when you give it fast components, it flies.

With Intel Iris Xe graphics, the Chromebook Spin 514 should be adept at running Android games. At 14 inches, this is still a large machine in tablet mode for playing games, but it’s doable. I’d probably just prop it up on my knees and have at it if I were in a gaming mood.

I don’t know how large the battery is in the Chromebook Spin 514, but Acer promises up to 10 hours of battery life. That would be on the edge of acceptable, and once I can benchmark the laptop, I’ll be sure to report the results.

The Chromebook Spin 514 features a 14-inch Full HD IPS multitouch display, unfortunately in the old-school 16:9 aspect ratio, and it supports the Acer pen. That means the display will be too stretched out in tablet mode, as opposed to the taller 16:10 and 3:2 aspect ratio displays that are closer to a real piece of paper in their dimensions. Acer didn’t provide any specs on the display, and so I don’t know its promised brightness, but Acer’s past Chromebooks have done well enough in this department. I found the display to offer plenty of colors and brightness in my usual working environments.

Two upward-firing speakers flank the keyboard, and they put out decent volume with just a hint of distortion. Mids and highs were a bit muddied, and bass was lacking. The sound quality is fine for the occasional YouTube video, but you’ll want headphones for music and bingeing Netflix.

Notably, the webcam is 1080p, joining a slow-growing trend away from grainy 720p video. That’s a welcome addition that will make the Chromebook Spin 514 an effective videoconferencing tool.

The keyboard has plenty of spacing and large keycaps with plenty of travel and a light touch. I found the switches to be a little looser than I like, but there’s still a snappy bottoming action that makes for precise typing. It’s not the best Chromebook keyboard I’ve used, but it won’t slow down fast touch typists.

The touchpad is moderately sized and has a comfortable surface for swiping. It supported all the Chrome OS multitouch gestures without a problem, and the buttons have a solid and quiet click. The touch-enabled display supports an Active Pen, but one wasn’t included with my review unit.

Acer is also introducing a few other Chromebooks that round out its Chrome OS lineup. The Acer Chromebook Enterprise 515 is a 15.6-inch clamshell laptop that offers a premium design, enhanced durability, and 11th-gen Intel Core CPUs. It can be configured with up to 16GB of RAM and up to a 512GB PCIe SSD. The display will offer optional touch capability, and the audio has been optimized for videoconferencing. The Chromebook 515 Enterprise will start at $650.

Lastly, the Acer Chromebook Spin 314 is a 14-inch convertible 2-in-1 using an environmentally friendly OceanGlass touchpad that’s constructed entirely of recycled plastic waste. The 2-in-1 will be available in January 2022 starting at $500.